Here’s Why Your Credit Score May Have Recently Gone Up 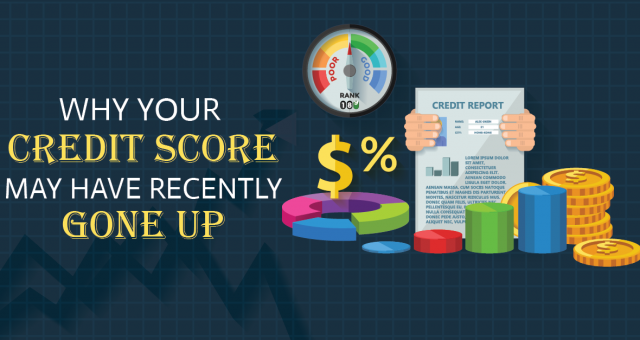 Credit Scores and credit reports play a vital role in the life of most Americans today. It determines the interest rates consumers pay for the credit card, mortgages and car loans and can ascertain if they qualify for a loan or not.

Your credit report may get a makeover as the three big reporting agencies (Experian, Equifax, and TransUnion) are doing things a little differently and have started excluding certain items from your credit report that used to damage your credit. This comes in the wake of a study by the New York Federal Reserve which found problems with credit reporting. It has recommended some reforms to improve the accuracy of their credit reports and also remove some negative items so that it can help consumers’ improve their credit scores. Some of the changes that can boost your all-important three-digit credit scores are:

Because of improved standards for utilizing new and existing public records, Experian, Equifax, and TransUnion have scraped most of the tax liens and civil judgments from consumer credit files in July 2017. Again in April this year, they went a step further by deciding to remove all tax liens from credit reports. Once this data is removed some credit scores can go up by as much as 30 points.

According to an estimate by LexisNexis Risk Solutions, about 11% population had a tax lien or judgment removed from their credit file.

The new rules will make it harder for medical debt to hurt your credit scores. Medical billing process can be complicated and confusing. To give time to resolve medical issues the three important credit bureaus have agreed to exclude medical bills on credit reports until they are at least 180 days due. Another plus is that unpaid medical bills that later get paid by your insurance should be removed from the credit bureau files so that it does not linger on and damage your score.

Due to the recent changes by NCAP, library fines, unpaid gym memberships or traffic tickets that have been lurking in your life will now be removed from your credit records and not damage your credit score.

As a result of these changes consumers are now witnessing a steady stream of changes which have boosted up their scores and according to the findings of New York Federal Reserve report the:

According to Bruce McClary, Vice president of Communications at the National Foundation of Credit Counseling, “If anyone has experienced a jump in their credit scores due to these changes, they should take advantage of the momentum and work towards improving their credit health.”

If your credit score has also seen an increase, you could consider calling your credit card company and negotiate a lower interest rate. This can result in major savings.

The other financial moves you could consider with this better score is taking out a new loan for a mortgage, refinancing your car, getting a better credit card or checking insurance rates, said Kimberly Palmer, the personal finance expert at NerdWallet.  However, you should be strategic, she added.

It is important to note that because of the prevalence of reporting errors, FICO recommends that you should double-check your reports for inaccuracies that can hurt your score.  The recipe to keep your score moving and reaching a good score is that you should consistently pay your bills on time and keep your credit utilization low. You should also apply for credit only when needed and reduce the amount of debt you owe as much as possible.

Zinucreditrepair offers a free credit repair consultation, which includes a complete review of your FREE credit report summary and score. Call us today to take advantage of our no-obligation offer.

Get started with a Free 10-minute credit analysis